The museum has been featured prominently in articles in several major newspapers over the past two weeks.

Tokyo Shimbun (August 21) introduced our ongoing special exhibition “Beyond Duty,” celebrating nine wartime diplomats (including Chiune Sugihara) who have been declared Righteous Among the Nations by Yad Vashem for rescuing Jewish refugees from the Holocaust. After describing the exhibition in some detail, the article goes on to discuss the recent visit by American visitor Chaya Small, who was able to escape Lithuania as a small girl thanks to a visa issued by Sugihara. It notes that the museum, normally closed on Mondays, was opened specially for her, with the Sugihara family there to greet her personally. She is quoted as saying how moved she was to meet the family and how deeply grateful she remains even now for Chiune’s humanitarian deeds. She also recalled the happy time she spent in Kobe those many years ago.

Yomiuri Shimbun (August 28), the nation’s largest daily, interviewed two great-grandchildren of a Sugihara survivor visiting from Los Angeles. The museum had been surprised when siblings Elisheva and Akiba Zahtz showed up several days earlier looking for their great-grandfather’s name on the museum’s Wall of Survivors, and Yomiuri wanted to meet them and ask their story. They told of how they learned of their relative’s harrowing experience only after he died in 2000 from a recording he left behind. They keep a picture of his visa on their phones. Discovering the museum online, they made it a point to stop by and pay their respects during their trip to Japan and were delighted to meet the family of the man responsible, as they say, for their very existence. They offered to share the recording with the museum, a particularly valuable item for us as few such materials exist from direct survivors. The siblings probably never imagined that they would become media stars in Tokyo. The photo shows them holding a copy of the visa alongside the Sugihara family.

Articles about the museum could also be found in Gifu Shimbun (August 14) and Mainichi Shimbun (August 22) We have enjoyed a spike in visitors since the opening of the special exhibition and the related media exposure. We are grateful to all of these outlets for their coverage. 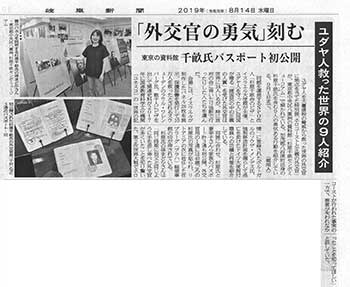 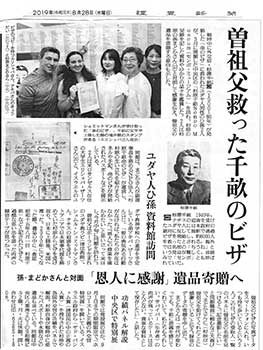